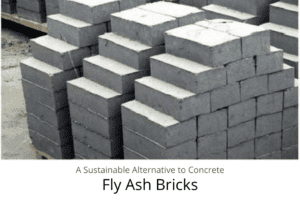 What are fly ash bricks?

Bricks manufactured from fly ash, cement, and sand or stone dust are an uncommon kind of brick that are produced by combining industrial byproducts. These particular bricks are quickly overtaking clay bricks as the most preferred choice for construction all around the world. Fly ash bricks are constructed from solidified fly ash (a by-product of the power plants) as well as by-products of cement production.

An important feature of fly ash bricks is that they are manufactured using fly ash as the major constituent, instead of cement. Fly ash is also an organic substance, which makes it extremely strong as well as heat conductive.

How it is made?

It is made from fly ash, crushed cement, water and sand. They have a low clay content. The process involves mixing crushed cement and water with fly ash to produce fly ash cement. This cement is used for making the walls and floors of houses.

When made as bricks, they are available in different sizes like 4 x 8, 4 x 4, 6 x 6, 10 x 8, 4 x 4 and 4 x 6 inches. It is recommended to choose bricks having some quantity of lime which acts as a binding agent. So, the construction industry of India has gained a new and easy method of construction for cost-effective and long-term construction. The fly ash bricks are affordable and have some excellent features which may suit our wants of construction.

Read more: What is Hydraulic Cement

Fly ash bricks are durable and sustainable and contribute greatly to the environment by reducing the use of fossil fuels. They are cost-effective and last for more than 100 years. They do not require cleaning and require low maintenance as compared to other traditional bricks. Due to the increased application in the construction industry due to the quick urbanization in developing countries such as India, fly ash brick is estimated to witness steady growth over the next 5 years.

Well-suited for construction of residential houses, commercial buildings etc. These bricks are prepared by a high-quality mortar made from coal and fly ash cement. Resistant to fatigue, they have a good rate of density which facilitates their application in high-intensity traffic areas.

Fly ash bricks have a good look owing to their appealing colour like cement, homogeneous size, and smooth polish. Because of the consistent size, the amount of mortar needed for walls and plastering is reduced by about 40% to 50%.

Color Green, grey, white and blue are the colours of fly ash bricks. They are also available in different designs.

Due to the excellent density and crush strength, it is used for the construction of large buildings due to its superior strength compared to traditional bricks. Their ability to withstand high pressure is also an advantage.

For applications where temperature rises can cause condensation such as churches, etc., fly ash bricks would be an ideal choice.

They don’t absorb as much heat. It goes through a pozzolanic reaction, which creates less heat. In the summer, it keeps your house cooler, making it ideal for Indian temperatures.

The thermal properties of fly ash bricks are rated at R-9 and can sustain temperatures of 50 degrees Celsius. A sample fly ash brick has a high R-value of R-5 and is not susceptible to scorching or shrinkage when exposed to fire.

If a fly ash brick catches fire, it will only burn small.

How Can Fly Ash Bricks be Used for Fire Risk Reduction:

The by-products of fly ash production are sustainable and are not harmful to the environment. Low mass-fly ash bricks are suitable for making high volume low energy architecture.

It is widely used for basement walls, flat walls, brick veneer, and half-column walls. Can be used in flat walls for wall foundations, lining and piers. Half Column Wall In this type of wall, the width of the fly ash brick is 12-15 feet.

It has high strength at similar moisture content, therefore they are suitable for foundation construction and can be used to build very strong mud walls. They are also more compact and less expensive, and because of that they are commonly used in flat and panel houses.

These bricks are most commonly seen around thermal power facilities. Finding merchants in all of the main cities and towns, on the other hand, would not be a problem.

It is cheaper as compared to concrete and conventional bricks.

Fly ash bricks will cover a greater area than clay bricks for the same amount of money. Less consumption of mortar. It necessitates less manpower. When compared to clay bricks, the cost is around 30% less.

A large number of builders avoid using these bricks due to their thinness and uneven size which create a lack of symmetry.

Fly ash is soft enough for bonding and insulation to dry, hence is not suitable for landscaping purposes.

It is also prone to leach away acid from soils, so be careful in design and construction.

These have been extensively used in developing countries such as India, Africa, Sri Lanka, and Indonesia. They are widely used as a substitute for clay bricks because they are considered cost-effective. Moreover, the porous nature of fly ash bricks makes them resistant to rust. It has gained popularity in construction for its low embodied energy cost.

Fly ash bricks are a special type of brick, which is composed of fly ash and its products. It has been manufactured into bricks or blocks. These are not well known in the world but as a matter of fact, they are highly demanded in developing nations. Fly ash bricks are intended for residential and non-residential purposes.

How do Fly Ash Bricks work?

Fly ash bricks are usually compacted into a container of large size like a concrete box, made of concrete and mortar with fly ash as the main component. Similar to ordinary brick production, the only difference is the mixing of the fly ash component with the rest of the material to attain a brick.

Fly ash bricks are lightweight, durable, fire resistant and relatively inexpensive to produce. They also do not have significant strength degradability. It is advantageous in terms of its sound insulation properties. In fact, they are best suited to withstand harsh environmental conditions such as rain or blast-furnace hot temperatures. Fly ash bricks are not easily damaged by fire.

Concrete production needs a lot of steel which results in a heavy toll on the environment, which results in the slumping of city infrastructure. Fly ash brick provides a source of recycled industrial materials for building and construction, thereby avoiding the pollution of the environment.
A new stone-free building technique has been invented to make concrete without any cement. Fly ash bricks are added on top of the concrete and make it strong and fire-resistant.

The fly ash bricks are easy to handle and make for excellent construction materials. The fly ash brick has excellent fireproofing properties, it is resistant to cracking and breaking. It keeps its shape and size even if it gets exposed to high temperatures.