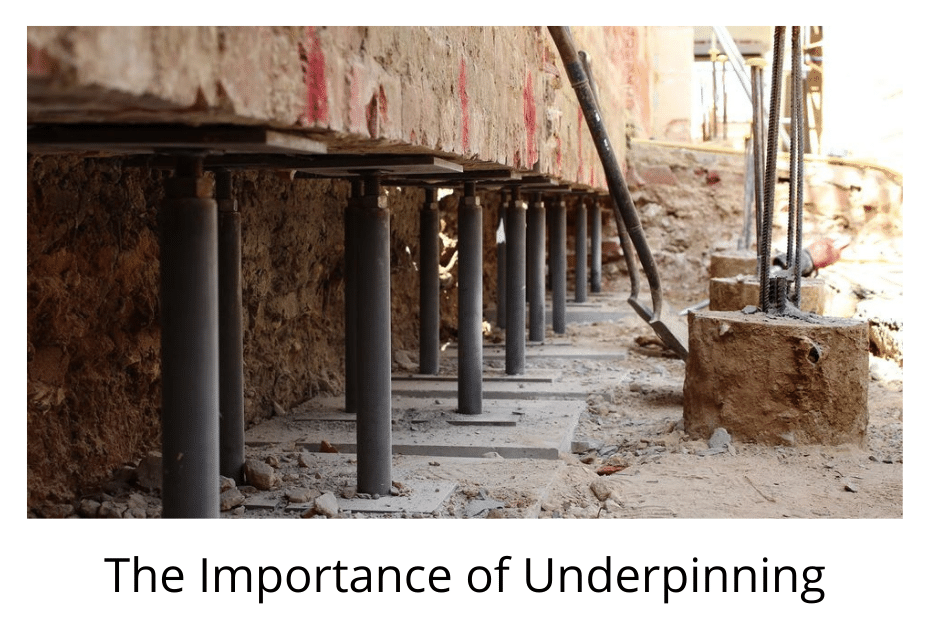 Underpinning refers to the process of adding support to the foundation of an existing structure. It is necessary in the event that the old foundation is no longer able to sustain the weight of the structure. This is often the consequence of a change in the structure of the soil, which may have occurred as a result of the kind of soil or as a result of some external effect on the soil.

When is underpinning needed?

Underpinning is necessary for the majority of homeowners in situations when the original foundation cannot adequately hold the weight of the house. This is often the consequence of the following:

Underpinning may also be necessary for the following reasons, but is less typical circumstances:

How is underpinning done?

The first step in the process of underpinning is either removing the earth from under an existing foundation.

The earth is removed in regulated steps, termed ‘pins,’ of restricted length to prevent undermining the foundation, which might lead to structural collapse.

A geotechnical engineer will evaluate the composition of the soil to decide which soil strata are adequate to support the weight of the structure. This evaluation will define the depth of the excavation that will be performed.
The earth that is removed during excavation is then replaced with fresh material, most often concrete, to create a new foundation under the older one.

There are several ways to do underpinning, including the following:

Because of its inexpensive cost and its capacity to withstand enormous foundation loads, the mass pour technique is the one that is used the most.

In this technique, a strong, continuous layer of concrete foundation is poured in portions under the already-existing foundation.

Although this technique consumes a significant amount of material, it is the way that requires the least amount of engineering, does not call for the use of heavy gear, and enables usage to continue uninterrupted during the building process.

The beam and base technique is a method that is considered to be more technically sophisticated. In this approach, an existing footing is replaced with a reinforced concrete beam that is erected underneath the whole foundation.
The load is transferred from the new beam, which is used in this procedure, to a mass concrete foundation, which then distributes the weight uniformly throughout the ground.

Even if it is more sophisticated in its construction, the viability of this technology still primarily rests on the structural layout of the structure that is located above the base.

The mini-piled technique of underpinning may be used in situations in which the ground conditions are unstable or where there is restricted access around the region of the foundation.

Although this technique is capable of overcoming even the most challenging soil conditions, it is far more complicated to implement, and the procedure may end up being fairly pricey owing to the need for specialised technical skills and apparatus. Read more about mini piling here.

Underpinning is used for short-length columns ranging from 1.2 to 1.8 metres in height.
First, holes are cut at regular intervals in the wall above the ground level, and then sturdy needles are put through the holes to bear the full weight of the construction. This process is repeated until all the holes have been used.
In most cases, the needles are constructed out of steel joists or wood beams.

When RSI beams are used, wooden bearing plates are placed between the beams and the supporting wall to reduce the amount of crushing that occurs to the masonry.
There are jacks available to give support for the needle beams.
Jacks need to be positioned a safe distance away from the walls that are providing support in order to provide enough room for trench excavation and concrete pouring.

When it is necessary to replace a foundation, the part of the wall that will be used for the new construction should be cut into pieces measuring between 90 and 120 centimetres in length.
Again, cut the next 90 to 120 centimetres along the length of the wall, and then rebuild it.
As a result, the wall foundation may be repaired or rebuilt.

During this stage of construction, concrete piles are pushed up against both sides of the wall.
After that, the needle beams are positioned above the piles that extend through the wall so that they may perform the function of pile caps.
It relieves the pressure that was previously placed on the wall.

This technique is useful for soils that are saturated with water and have walls that carry significant loads.
In this scenario, the piles and needles, beams, and other structural elements become an indelible part of the institution, but the already-established foundation of the walls is unaffected.

The process of supporting a structure’s foundation is known as underpinning. This is typically done by excavating around the perimeter of the foundation and installing support beams, posts, or piers. Underpinning can also be used to stabilize an existing foundation or to raise the height of a foundation. In some cases, underpinning may be required to meet the requirements of local building codes.